How to calculate margin vs. markup 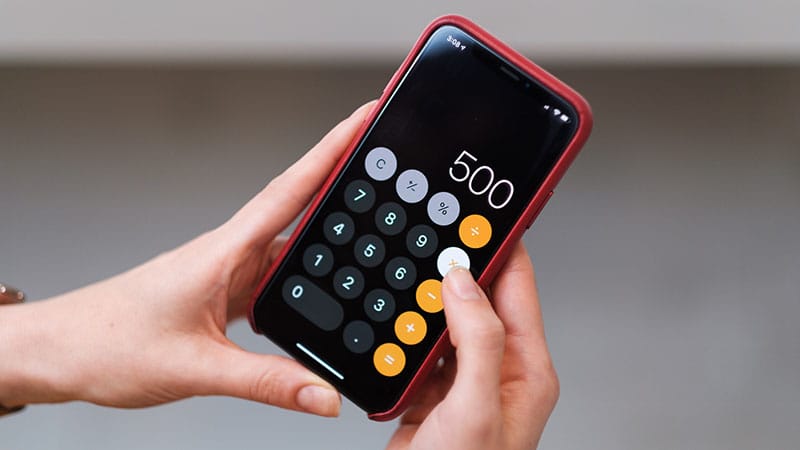 If you’ve been wondering about the differences between Margin and Markup and how to calculate those figures, this is the article for you! We’ll explore the relationship between cost, price, markup, and margins.

Margin vs. markup: what’s the difference? How do we calculate them?

It starts with deciding on how to price your products (which is a big deal!). How you price your goods will depend on whether you buy your products in bulk, or if you buy them from different vendors at differing prices. However, once you have a system in place to figure out the cost (a.k.a. cost of goods sold or your purchase price), you can use cost to calculate your price.

This is where the concept of markup comes in. Depending on where you search, you can get differing answers for what markup is, and what it has to do with something called margin (or gross profit margin).

If you’re wondering how to untangle that web of M-words and learn what the difference is between margin vs. markup, then you’ve come to the right place.

Margin vs. markup in video

If you’re one of the millions of people who takes to YouTube for quick tutorials, our Margin vs. Markup video has you covered!

How to Calculate Markup vs. Margin | inFlow Inventory

If you’d like a step by step breakdown of the formulas, read on!

What is the markup formula?

You can think of markup as the extra percentage that you charge your customers (on top of your cost).

An example of using the markup formula

Now let’s make the example a little more concrete. Let’s say the cost for one of Archon Optical’s products, Zealot sunglasses, is set at $18. That $18 is how much it costs Archon Optical to create a single pair of the Zealot. They will then turn around and sell each Zealot for the price of $36.

If we run through that calculation, we arrive at a markup of 100%: 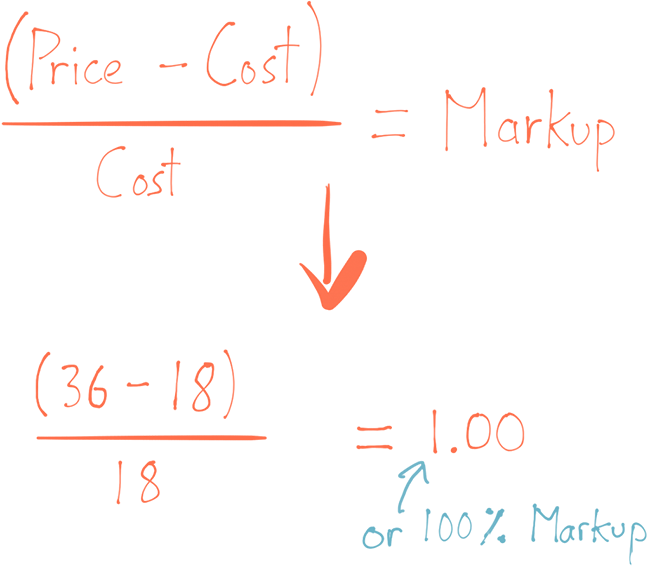 Pricing products based on markup

However, some businesses might set their prices based on a certain pre-defined markup percentage. They’d have the costs ready and have particular markup percentages in mind to help them calculate a price.

How would we express the markup formula in this case? Let’s write this out:

Expressing markup as a percentage is useful because you can guarantee that you are generating a proportional amount of revenue for each item you sell, even as your cost fluctuates or increases. This means that the markups you set up at the beginning should scale well as your business grows. We’ll discuss this more when you’ve scrolled further down this page.

What about margin vs. markup?

Now that we’ve defined markup and how it helps you decide on a price, we should discuss the other other big M-Word: margin. The type of margin we’re discussing in this case is gross profit margin, which describes the profit that you earn on a product as a percentage of the selling price.

What is the margin formula?

Margin is often expressed as a specific amount in currency, or a percentage (similar to markup). However, margin uses price as the divisor. If we want to calculate the margin on the Zealot sunglasses, here is what that looks like: 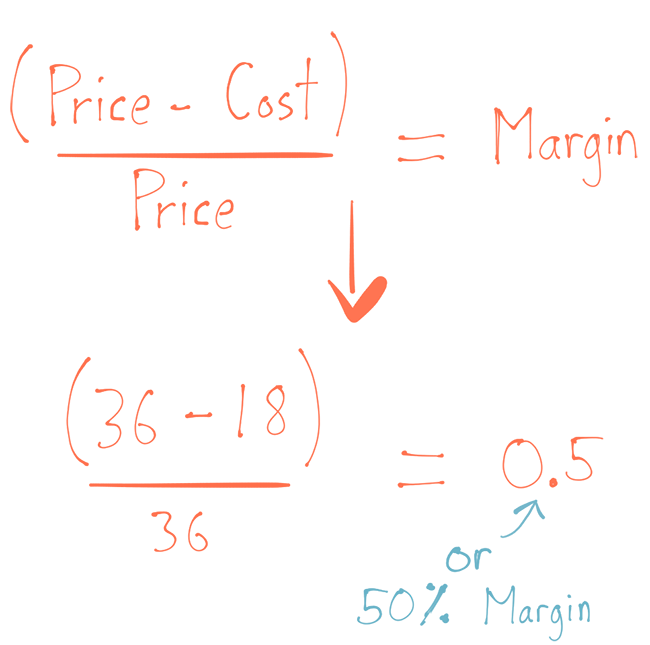 Expressed in this way, margin and markup are two different perspectives on the relationship between price and cost. Just like you could say: Maryan is taller than Thomas, or Thomas is shorter than Maryan.

The question then arises: if these two M words are so similar, how do we know which one to express or use at a given time? Here’s our take on that:

Markup is perfect for helping ensure that revenue is being generated on each sale. Markup is good for getting started because, as you are getting things set up, you are keenly aware of the costs for your business, and you’re still learning about the kind of revenue you can bring in through sales.

As you get to know your business better and you start to look at reports on your sales, margin can be helpful for examining how much actual profit you’re making on each sale.

The cost of manufacturing the Zealot may not always stay at $18 (actually, it definitely won’t!). So the wise staff at Archon Optical will want to make sure that their prices are always adjusted to reflect the increases in cost.

This where the concept of fixed markup really comes in handy, because it can help you to automatically adjust your prices based on changed in cost. You could have cost and price as separate numbers that you input into your spreadsheet or inventory management software, but it’s much easier in the long run to have them linked.

Defining your markup as a percentage above cost ensures that you continue to earn revenue on sales as costs increase, but it also means that you don’t have to keep automatically going back to adjust your pricing. Manually adjusting your prices based on cost is plausible for a smaller business, but this quickly becomes untenable as your inventory expands to include hundreds of items.

If the Zealot becomes more expensive to produce over time, the price will have to go up, and gaining a markup of $18 on a $36 item is very different a markup of $18 on an item priced at $55. A fixed markup percentage would ensure that the earnings are always proportional to the price.

What other factors affect markup?

We’ve described markup very simply thus far because we’re assuming a scenario where Archon Optical makes the Zealot for a set cost and sells it at a set price, and that’s all there is to it. Of course, real life is a little more complicated than that.

For each order of the Zealot, someone will have to be there to package and sell it. That’s a labor cost that’s likely broken down into an hourly wage.

If you ship Zealot to customers in boxes or send them in trucks to stores around the city, you’ll also have to factor the cost of freight charges. Sending express or two-week shipping can make those costs vary wildly.

Since the Zealot is a product that Archon Optical had to develop over time (it didn’t just materialize as a completed product), they need to account for all of the time and expertise that went into making sure that the Zealot was as as cool, aesthetically pleasing, and blocked as many of the sun’s harsh rays as possible. That product development time can also factor into cost.

If your markup percentages change often, you can use inFlow’s Product Pricing feature to help you change prices for multiple products, with just a few clicks. 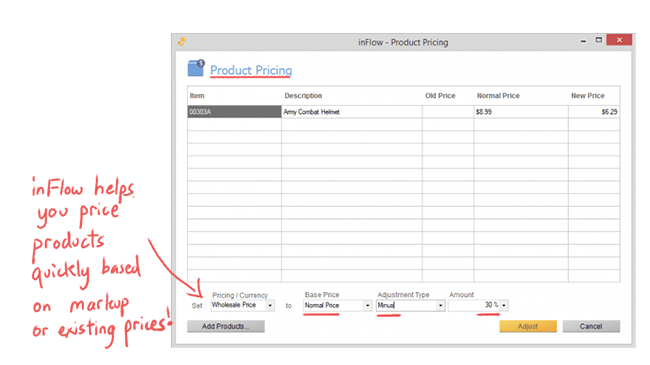 Or if you’d like to automate some of your pricing, inFlow can set up a fixed markup percentage (e.g., always sell for 30% above cost) for your products. This guarantees that you’ll always make money on each sale, even as your costs change.

Accounting FIFO method for valuating your inventory (Oh, and LIFO too!) Go to the article 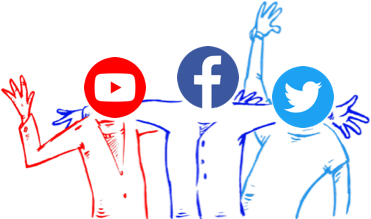