The new way to get back to basics 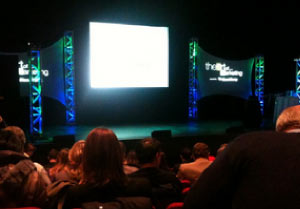 The inFlow team recently had the opportunity to attend the Art of Marketing conference in Toronto, which featured presentations from some of the leaders in the field of marketing.

Although each presenter had a slightly different take on the method to success, each was secure in the fact that pleasing customers was the key to success. Seems like a no-brainer doesn’t it? But some companies seem to have forgotten that the customers are what make or break you and it’s somewhat refreshing to see that individuals who are at the top of their game got there by appreciating their own customers.  What’s more, it seems that with the social media revolution, we are now at a point in history where it is once again possible to create one-on-one relationships with our customers.

Gary Vaynerchuk (host of WineLibrary TV and Co-founder of VaynerMedia) suggested that with all this technology available it is not acceptable for a company to take longer than 24 hours to respond to a client.  He then went on to inform the audience that when clients send him messages via his twitter account he takes a few moments to tweet back and make that connection.  “I could be checking e-mails and making multi-million dollar deals with that time but I’m not gonna do that,” he called out to the crowd.  “Because that customer took the time to send me a message so I’m going to take the time to respond.”  Sure enough when it came time for the Q&A portion of his talk, a member of the crowd stood up and informed him they’d been exchanging tweets for some time and that he was owed a hug.  “Alright then, get up here,” responded Vaynerchuk, “I remember this hug, it’s been a long time coming.  It’s going to be epic!”  It’s this ability to connect with his clients (no matter how superficially) which he claims has propelled him to success.  And he’s not the only one.

Later in the conference, Guy Kawasaki (former Cheif Evangelist for Apple Inc. and founder of the online Magazine rack AllTop.com) also suggested that it is the ability to enchant one’s customers that will take you over the top.  Your customers need to like you in order to buy what you’re selling; unless you’re the only game in town.  Though if you’re the only game in town and with no loyalty to your brand, customers will drop you like a hot potato as soon as another offer comes around.  So it seems, it’s important from not only a morality perspective to treat your customers well, but it makes good business sense.  Much like the other presenter, Kawasaki was suggesting that an emotional connection to your customers is far more successful than even the best of sales pitches.

We talked about this a few weeks ago but there are all sorts of services and technology available to allow you to connect to your customers in meaningful ways.  What’s more, if some of the biggest names in marketing and business are using these methods to succeed, it suggests that you can be fiscally and morally responsible simultaneously.  It’s nice to know that the rest of the world is finally catching on to what we’ve known for awhile…your customers matter!