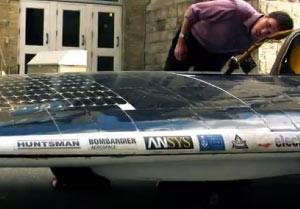 As many of you may be aware, we as a company have long been heavily involved in non-profits, donating a portion of our profits each month to the KIVA business loans project in addition to providing discounts on our software for registered non-profit organizations.

As a company which prides itself on being both socially responsible and technologically progressive, we jumped at the chance to work with the Blue Sky Solar Racing team.

Founded in 1997 at the University of Toronto, the team is a student run initiative who themselves are involved in promoting not only environmental awareness, but also technological innovation.  Competing first within Canada against longer established university teams, within a decade the Blue Sky team has risen to a 5th place ranking at the World Solar Challenge 2007 (ranking highest amongst the Canadian teams in attendance).  Since the team’s inception it has produced five solar cars, with the sixth currently in production in hopes of participating at the World Solar Challenge 2011.  And that’s where inFlow came in…

“Our team was looking for inventory software to help organize and track different categories of mechanical and electrical parts at the shop. “  The team needed a powerful solution and inFlow was there to help.  “We decided inFlow was perfect for our team as it keeps track with the status, location and quantity of our inventory.“  With the issue of managing their inventory solved, the team is was able to get on with the business of building a solar powered race car.

Currently working on the finishing stages of their 6th generation solar car–a full build takes approx. 2 years– and expected to be completed in mid-June, the team is planning for the World Solar Challenge.  The Challenge is held in October in Australia and pits cars from all over the world against each other.  “Our goal is definitely to win the race,” the team noted via e-mail, “but we are also looking to outperform our 5th generation car which had a peak speed of 120km/h and average speed of 80 km/h. We’re confident our innovative design will enable us to continue to succeed in the upcoming race.”  While preparing for their upcoming participation in the World Challenge the team also appears at up to 30 events each year to showcase their solar car and to educate the public with green technology.  In addition to attending events, they hosts shop tours for those who are interested in the process of making a solar car.

The unveiling of the 6th generation car takes place in July at the University of Toronto. For more information on this and other upcoming events or the Solar Car Team visit their website at http://www.blueskysolar.utoronto.ca/