Get Behind Team Plastiki! 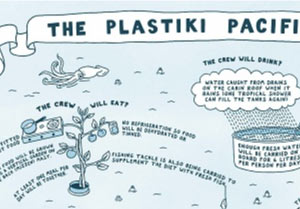 The inFlow team loves a good bit of innovation. Innovation is, after all, the mother of change. But not all change is good, especially when it comes to the environment.

David Rothschild and his crew on the PLASTIKI hope to draw attention to the environmental challenges faced by our oceans by making the 7000 mile journey across the Pacific Ocean in a boat made entirely from plastic bottles.

His objective is to highlight what amazing things people can achieve with recycled materials and the catastrophic consequences when people don’t recycle. Rothschild and a mix of scientists, environmentalists and photographers set sail in March from San Francisco for Sydney Australia.

The Plastiki is a distinctive, one-of-a-kind 60-foot (20m) catamaran made out of an estimated 12,000 to 16,000 2-liter soda bottles, stripped of their labels, washed, filled with dry-ice powder and then resealed. Made of 90% recycled material, it also has two wind turbines and an array of solar panels will charge a bank of 12-volt batteries, which will power several on-board laptop computers, a GPS and SAT phone.

An ambitious expedition for even the most experienced sailor, the 100 day journey is likely to be fraught with danger including two transits of the ITCZ or doldrums, situated around the equator, where periods of no wind are peppered with savage nightly storms. The craft cannot do more than around four knots, and is unable to tack into wind, so they’ll be depending on the reliability of the trade winds to push the craft in the right direction.

The project has been arranged by environmental group Adventure Ecology. An organization that makes expeditions to far reaches of the globe to highlight such sensitive matters as global warming and inefficient waste disposal methods.

The problem they are campaigning about is so severe that the United Nations reported in 2006 that each square mile of ocean contains 46,000 pieces of plastic. Many of these are now so small that they are being ingested by birds and mammals, causing incalculable harm

Of particular concern is The Eastern Pacific Garbage Basin, a floating landfill between San Francisco and Hawaii about twice the size of Texas.

This floating landfill is made by slow moving currents that suck up all the waste from around the world and collect it in two areas of the Pacific Ocean (there is also another large floating landfill forming in the Western Pacific Basin (Researchers estimate that of the 90 million tonnes of plastic produced each year, 10 per cent ends up in the ocean)

The expedition plans to make landfall in Sydney, Australia after visiting several sites of ecological importance or which are susceptible to environmental issues caused by global warming, for instance the current sea level rise, ocean acidification and marine pollution.

So far, Plastiki’s traveled for 63 days and covered 4858 miles. It’s now approaching Tuvalu in the Southwest Pacific Ocean, considered one of the most vulnerable places in the world to the affects of global warming.

Follow Plastiki’s journey and offer your support to this innovating, inspiring and audacious project. To learn more about the design and construction of this amazing boat watch the video